Who is on the FSW Agenda for Killer Kross Saturday Night? 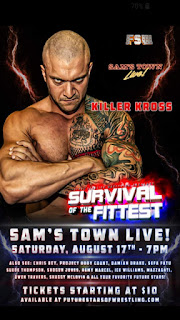 Arguably the greatest wrestler in Future Stars of Wrestling (FSW) history returns to Sam’s Town Live for the first time since his loss to Chris Bey at FSW10 on June 23rd. Killer Kross who boasts a seemingly unbeatable streak of 923 undefeated in FSW and wasn’t pinned clean until the Anniversary show (ahem, Chris Bey ahem). That isn’t what folks around the wrestling world are talking about though. Many want to hear what he has to say about All Elite Wrestling’s (AEW) Jon Moxley who stunned FSW and the Las Vegas Wrestling Scene when he answered the challenge of Kross and fought him to a no-contest at the FSW Arena on July 5th in the first installment of Natural Born Killers. The book is most definitely not closed on a feud in its Genesis.


Many have pointed towards MECCA V for a possible rematch, but FSW Officials have been mum on the Moxley subject since shortly after the show. Even if they have a match signed there is no reason for the FSW Boss Joe DeFalco to reveal his hand yet anyway if he holds the cards. Moxley-Kross at MECCA V would be difficult to top for anyone the rest of 2019 and is legitimately a Main Event anywhere. Regardless if they meet again at GCW Josh Barnett’s Bloodsport II on September 14th in Atlantic City (not scheduled )or even at MSG with LUCHA LIBRE AAA Worldwide would not affect a September 29th Showdown here in the Fight Capital. When the Boss said Moxley’s arrival was the greatest moment in FSW history it’s hard to argue. It was on every major wrestling site and all eyes were on Las Vegas.
So a rematch between the two would be terrific, but trying to figure out what the Tollman will do next could put you in an asylum, so we won’t take it too far. Will Kross challenge Moxley again? Is the hunt still on? If not who else wants to make a name for themselves against the Time Collector? No matter who he faces Killer Kross is must-see. 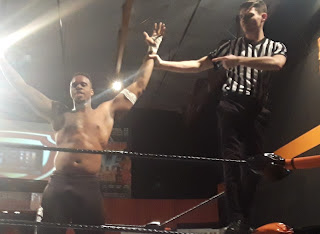 When FSW Champion “Ultimate Finesser” Chris Bey exacted a portion of revenge against Kross in June and promptly proclaimed himself a Living Las Vegas Legend after spearing him through a Table to collect the historic win. A portion of revenge was for Killer and the other is likely for John Morrison. Bey told me last month in regards to Morrison that, “payback is a bitch,” and the Finesser has managed to collect those debts in the past. Now he teams with his young rival Shogun Jones and another Superstar former Nevada State Champion Sefa Fatu to take on the Hammerstone-less Project Bodycount.
Despite Your Boy Hammer going to Japan there is no love lost for two of his cronies in Graves and Gabriel Gallo. Graves put Fatu to sleep at FSW10 helping “The Business” win the Blue Belt, and there is no doubt “The Problem” is looking to exact revenge of his own. Don’t sleep on Shogun Jones who’s made it abundantly clear that he dislikes both the Champ and Sefa, so despite the recent cheers the 2018 FSW Rookie of the Year is looking out for #1. Shogun has won on the Big stage taking last year’s Bockwinkel at FSW9 so we know he’s more than capable, and he’s made it clear he wants another shot at the “Finesser.”