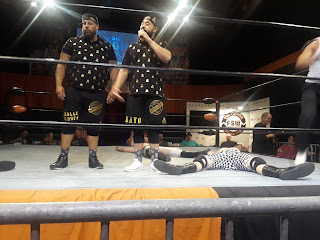 McLovin arrived and they all took “The New York Legend” to the woodshed. Not so fast my friend. The Bonus Boyz came to the ring and were separating both parties when in the blink of an eye Clutch Kucera and Sugar Brown took out the three young stars. They took to the microphone, a wad of cash, attacked Management and signed a “multi-year” deal with Sal E. and Vandelay Sports Management.

It’s tough to argue the logic for the Boyz here. Sal E. is as shifty as they come, but you cannot debate his success most recently with Sefa Fatu. Don’t forget who led “The Problem” to the Nevada State Championship in the first place. Remy has done nothing but succeed and the Boyz needed a spark. They came back in January to much fanfare only to be dispatched by then FSW Tag Champions One Percent (Royce Isaacs & Jorel Nelson). Then big losses to the Soul Burners (Tomaste & Ryan Taylor) and The Following (Cut Throat Cody & Jakob Austin Young) pushed the former Champions down the Tag Team ladder.
Here’s why it could pay off. The Boyz are one of the most physical teams in the game and the added benefit of Sal E. at ringside can be the difference in winning and losing matches. When you take the talent the former FSW Tag Team Champions already possess, add in Sal E, and with more edge, these guys will be back in the Title picture quickly. Vandelay Sports Management is the official representation for Marcel and The Bonus Boyz, but are they the only ones? Does VSM plan on bringing more talent into the fold? They have one of the Top 2 contenders for the No Limits Title and a Team that’s a win or two away from being back in the Title picture. They needed to change things up, but we didn’t expect anything this drastic. Only time will tell if Clutch and Sugar’s decision to work with Sal E. will bring them the Jackpot or the poorhouse.