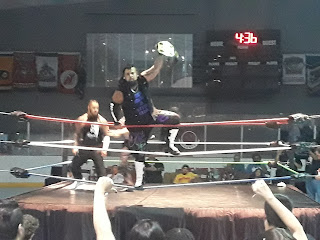 In case you thought Big Valley Wrestling (BVW) doesn’t bring their top stars to the fundraisers think again. Minutes ago BVW Officials confirmed that Las Vegas Champion “The Delinquent" Kevin Ducqets will take on “The King of Pop and Elbow Drop" Santana Jackson at Thursday Night Throwndown inside the ROTC GYM at Rancho High School. The event is to benefit the Rancho Wrestling Team. BELL TIME 6PM. Officials confirmed this is a non-title match. With two big defenses coming up in November it makes sense for him to keep this match without Gold on the line. However, The Delinquent does whatever he wants and is cocky and brash enough to put the belt on the line anyway, so you never know. The Las Vegas Champion is the favorite to win BVW Wrestler of the Year and is taking on all opposition. He has Tommy Purr set for November 16th and on the horizon a November 24th Title defense against Funny Bone at the BVW 5th Anniversary Show. The speed and quickness of Jackson could frustrate Ducqets who prefers opponents who will stand toe to toe and trade strikes. Santana doesn’t want a scrap. He will look to create space and use his unique style to take Ducqets out of his game. Both Jackson and Ducqets picked up wins at tricks Treats and Turmoil, but this match is big for SJ. Hes been a regular on the BVW scene most of the summer and any win over Ducqets would be career changing. Whether he fights his best friend, Sefa Fatu, Sean Black, or Funny Bone the Las Vegas Champion stays composed, understands the mental game and is an expert at playing it. What makes Ducqets successful is the Broken Glass Cutter. He can hit the finisher anytime he wants and constantly sets traps to lure his opponents in. If Jackson gets caught up in the crowd and overconfident his face will hit the mat faster than you can say “Billy Jean is not my lover.”  Who ya got?
at November 05, 2019