Who Will Bleed First? Greg Romero vs Kyle Hawk 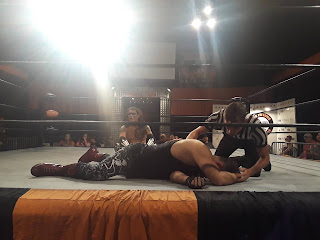 Greg Romero returned to the FSW Arena to chants of “welcome back" but he wasn’t looking to celebrate, he was looking for blood. “The Bridge Burner” had been on the shelf the past several weeks with a broken jaw administered by a knee from Kyle Hawk. The Leader of the Arrow Club connected as Greg attempted a moonsault early in their match Labor Day weekend. The assigned official Cody stopped the contest immediately and we hadn't seen him since. At High Octane this past Saturday Romero challenged Hawk to a First Blood Match November 15th at the Against All Odds Rumble at Sams Town Live. The rules are simple, first to bleed loses. First Blood matches have been part of wrestling for decades. One of the most famous was in 1986 when Tully Blanchard beat “The American Dream" Dusty Rhodes at Starrcade, and legends Ric Flair faced Hollywood Hogan at WCW Unscensored in 1999. The WWE has had 9 recorded First Blood Matches beginning in 1998 when Kane beat Stone Cold Steve Austin at King of the Ring after he said he would set himself on fire if beaten. Our resident WWE Historian and co-host of the pop culture show Morning Woodruff, Travis Woodruff lists his top 3 First Blood matches as the aforementioned Kane-Stone Cold, the 2006 match on RAW between John Cena and Kurt Angle, and the last WWE First Blood encounter in 2008 between Cena and JBL. Woodruff also made it clear “There arent any really good First Blood matches, but these are the best. We wont have that problem November 15th. 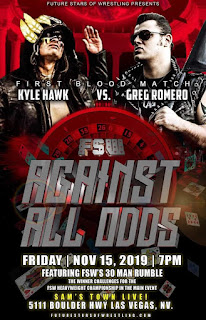 This match could steal the show and Romero get his chance at revenge against one of the top heels in Las Vegas and the fans wont have to choose sides for this one. Don’t be fooled by Hawk bringing security to ringside. He's not afraid of Romero and welcomes the opportunity to injure him again. Since their match in August we've seen a more violent side of Hawk who has arrives and just assaulted wrestlers before matches with a more surly attitude than we've seen before. There will be no catch wrestling in this so don’t expect anything resembling a grappling hold and this one may start before they hit the ring. This match is must-see. Who ya got?
at November 07, 2019